We have the solution to protect you from EMR exposure. The WaveRider is a patented invention of Dr. Igor Smirnov who invented the Molecular Resonance Effect Technology (MRET) that has helped thousands of people to stay healthy. Since its launch in January 2014, many users have  benefited from its use.

WaveRider is a well-tested device that has been validated by reputed laboratories across the United Sates and has been proven to show its effectiveness against EMR exposure within a lab-tested distance of 9 metres spherically. 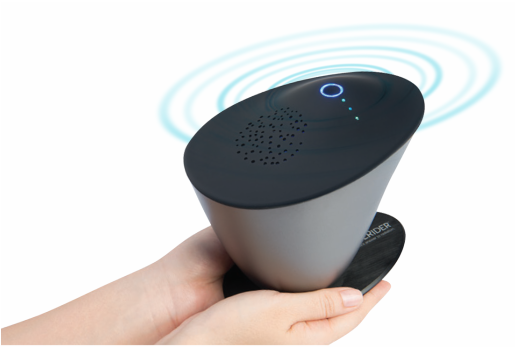 This small and elegant device can be placed in your home, school, workplace or almost anywhere, where protection is needed from the harmful effects of today's modern-day wireless environment. Since its global launch in January 2014, many users from all over the world have benefited by having WaveRider in their homes and workplaces. WaveRider's latest ground-breaking resonance technology uses its own proprietary frequencies (molecular resonance effect technology) to provide healing effects to the body and protects it from the effects that EMR field does to living cells.

EFFECTS OF EMR TO THE HUMAN BODY

WHY EVERY WIRELESS HOME  OR OFFICE NEED WAVERIDER?

WaveRider alters the effects of EMR to make it acceptable to our bodies at the cellular level. Our bodies are able to accept “natural" frequencies (found in nature) which are random and “noisy". However, our cells react and harden against the man-made EMR produced by our cell phones and other gadgets. With its breakthrough, patented Noise Field technology, the WaveRider counteracts man-made EMR by producing “natural" frequencies that "ride" on the waves of the EMR. The result is that our cells accept this combin﻿ed "EM﻿R plus WaveRider” frequencies.

WHAT BENEFITS CAN YOU SEE AFTER USING THE WAVERIDER?

WaveRider affects different people differently. Every individual has a different set of health and physical characteristics and needs. Users of WaveRider mostly report that upon using the WaveRider, they are able to sleep better, more deeply, and longer.  Many report that they wake up feeling more refreshed.

A common feedback is that they feel more mentally alert, less fatigued and clearer in their thinking.

All these, despite not reducing their workload or time at the computer or cell phone calls.

According to Dr. Igor Smirnov, the beneficial and health frequencies in the WaveRider will lead to a gradual general improvement in our health over a period of time.  There is likely to be an increase in energy levels and a boost to the immune system over time.

Dr. Smirnov has put into the WaveRider a package of frequencies that causes a positive resonance for the brain.  This is likely to reduce lethargy, increase motivation to solve problems and enable the brain to function more effectively.

The WaveRider also has frequencies targeted at improving the immune system.  When our immune system improves, we can expect that some diseases and illnesses will diminish over time.  One user of the WaveRider who had prematurely menopaused, reported that her menstruation started again after she started  using the WaveRider. This is an indication that the body is returning back to its natural and normal state.

HAS WAVERIDER BEEN SCIENTIFICALLY VALIDATED?

The WaveRider technology's efficacy has been tested and certified by independent laboratories in the US, including MET laboratories whose certificates are widely accepted by more than 30 countries worldwide.  Their scope of testing includes most cellular and PCS handsets that require Specific Absorption Rate (SAR) testing. WaveRider has been shown to absorb up to 40% of SAR on your mobile phone.  Thus using WaveRider to be part of your daily life will mean less stress to your body with the use of mobile phones.
In one of the lab tests, the WaveRider was found to have reduced mobile phone SAR (radiation absorption) values by up to 40%. The many tests all conclude that it offers protection against a wide range of electromagnetic radiation. It is quite simply the best that Science can provide.

THE TECHNOLOGY BEHIND WAVERIDER

WaveRider is a device that alters the harmful effects of man-made EMR without changing the EMR itself.

HAVING YOUR CAKE AND EATING IT TOO

WaveRider’s technology not only shield you from the harmful effects of EMR but it also carry with it signatures of frequencies that have the ability to heal the body naturally and the potential of stabilising and improving brain performance. You do not have to sacrifice your modern day technologies and all the conveniences that these devices have in our modern-day life. WaveRider will not affect the transmission quality of your WiFi signals. You will have peace of mind knowing that your surrounding environment is now safe.  And you are protected from the harmful effects that EMR has on your body. 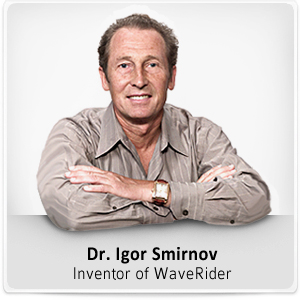 The WaveRider technology is the brainchild of Dr Igor Smirnov who is also an early pioneer in the exploration of electromagnetic radiation and its affect on the human body.  A brilliant scientist-inventor with a background in nuclear physics and nuclear engineering, Dr Smirnov specializes in advanced research on the influence of low frequency electromagnetic oscillations on human cellular physiology. Dr Smirnov is most well-known for his pioneering invention of the Molecular Resonance Effect Technology (MRET). His MRET technology has helped heal people suffering from a wide range of diseases, from cancer, diabetes, Alzheimer disease, to psoriasis and chronic fatigue syndrome. Dr Smirnov is a nuclear engineering graduate from St Petersburg Naval Academy, where he also obtained a MSc in Mechanical and Bioengineering. He received a PhD in Clinical Psychology from St Petersburg State University. Dr Smirnov has written for many international scientific publications including European Journal of Scientific Research, International Journal of Biophysics, Journal of Research in Biology, among others.