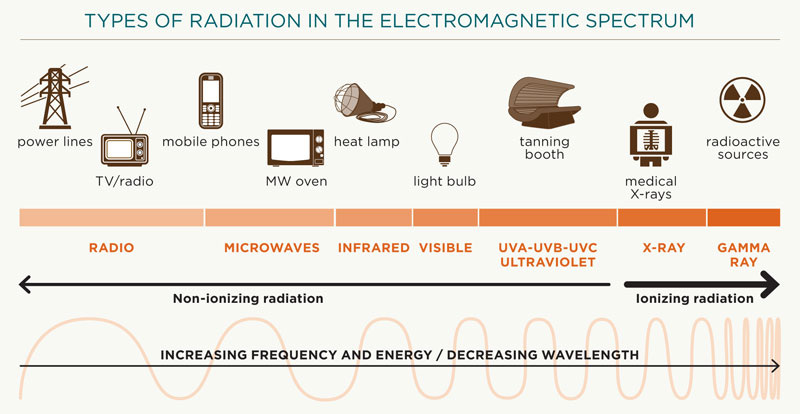 Exposure to cell phone radiation occurs because cell phones emit radio frequencies (“RF”), a type of non-ionizing electromagnetic energy that falls between FM radio waves and microwaves on the spectrum. Cell phone radiation does not have the capacity to break chemical bonds in DNA, but studies have shown that it does affect brain activity and may have other serious side effects linked to certain types of cancers. The cell phone’s RF energy is measured by its Specific Absorption Rate (“SAR”), which calculates the average amount of cell phone radiation emitted by each model.

Professor Olle Johansson on WiFi and the damage on DNA

A comment from a viewer (ZAIZAIDevlin):
1, We have been using radio for more than 5 generations﻿ but we are still here?
2, What mechanisms are there due to non thermal effects from microwave exposure that can damage a DNA strand (or any other molecule what so ever)? And why is Olle not explaining these mechanisms in any detail?
I expect this to be consored by the admin... Olle was awarded a prominent price in 2004, Obscurantist of the Year, by his scientific peers."

Professor Olle Johannsson's response:
These are two very important issues, and I hereby try to answer them to the best of my capacity.

1. To begin with, radio has not been used for 5 human generations but in most countries only for one - or at most two - full generations. Actually, the radio and TV exposures of our populations have possibly left an unwanted mark on us. For instance, Dolk et al (1997) found that there was significant decline in skin and bladder cancer incidence among adults in England as distance from a frequency modulation (FM) broadcasting tower increased. In the second part of the study, these investigators reported a similar trend for individuals who lived various distances from FM and TV towers, but the effect was less pronounced than in the first study. Furthermore, cancer incidence has also been associated with proximity to television towers (Hocking et al. 1996). We have studied the incidence of melanoma which has been increasing steadily in many countries since 1960, but the underlying mechanism causing this increase remains elusive. The incidence of melanoma has been linked to the distance to frequency modulation (FM) broadcasting towers. Using exposure--time-specific incidence extracted from exposure and incidence data from 4 different countries, compared with reported age-specific incidence of melanoma, we could show a correlation between melanoma incidence and the number of locally receivable FM transmitters (Hallberg & Johansson 2002). Of course, further studies are needed to unfold the mechanisms and factors behind these observations.


2. When it comes to the mechanisms behind EMFs and their effects on various molecules, cells, tissue systems, organs and biological systems, including bacteria, plants, birds, mice, rats, etc., there is a wealth of yet completely established explanations, including effects on ionic channels, nitric oxide pathways, hormonal gateways, transmitter release and reuptake, apoptotic factors, calcium fluxes, immune-regulatory pathways, growth- and differentiation-related molecules, phosphorylation-dephosphorylation/cAMP/p­rotein kinase A/DARPP-32, etc., and it would be very interesting to see these put to more scientific tests. Non-thermal effects are very common in biology and some of their mechanistic explanations have even been rewarded a Nobel Prize. When I and/or "ZaizaiDevlin" can explain the corresponding molecular events for the mechanisms relating to the current discussion about microwaves and health effects, then we may also come to meet His Majesty the King in Stockholm.

With my very best regards

A Comprehensive Joint Report on the health effects of EMF

The BioInitiative Report  is one of the most important joint reports on EMF affects on health, and on the inadequacy of present safety standards. This report has been written by an international group of scientists, researchers and public health policy professionals to document the scientific evidence on electromagnetic fields. This comprehensive report is the current prime document for evidence-based legislation related to tightened health and safety regulations.

In their 2007 report, the BioInitiative Report, concludes that the existing standards for public safety are completely inadequate to protect your health. The report includes studies showing evidence that electromagnetic fields:

August 24, 2007
An Australian study says living next to high-voltage power lines increases the risk of cancer.

Researchers from the University of Tasmania and Britain's Bristol University looked at a database of 850 patients in Tasmania diagnosed with lymphatic and bone marrow cancers between 1972 and 1980, and found that living for a prolonged period near high-voltage power lines may increase the risk of leukemia, lymphoma and related conditions later in life.

The study was published in the Internal Medicine Journal.

"The evidence of detrimental long-term health effects is far from conclusive, and international guidelines for limiting exposure to EMF are based on possible short-term effects rather than longer-term disease risks such as cancer," said Ray Lowenthal, a professor at the University of Tasmania.